January 29, 2020, was the second death anniversary of Awal Begam, the first child to have born in the small and beautiful valley, Goharabad located in Punial Tehsil of Ghizer, one of the Districts in Pakistan held Gilgit-Baltistan. She died at the age of 90 at 9:00 AM on 29 January 2018 at her home in Sherqilla, the former capital of Punial State. She left three daughters, two sons, and hundreds of inhabitants of the village in mourning.

Awal Begam was born to Shero Khan, the eldest son of Gohar Ali, the founder of Goharabad, who brought this barren land under irrigation. Shero Khan along with his father and three other younger brothers had migrated to their new home in the newly inhabited place from a nearby village known as Gitch. Abdul Aziz, the eldest son of Gohar Ali stayed back with his family to look after the lands owned by the family.

She was named Awal Begam which means the first female in Urdu.  She was brought up with all the love and pride as the first child in any family is brought up with.  She was married at a very early age of 13 or14 years, to Amur Khan, a resident of Sherqilla which used to be the capital of the princely State of Punial

With her death came the end of the living memory of the village. She used to narrate how the new village was gradually turned into a hospitable place by sheer means of diligence, hard work, perseverance, and steadfastness. She used to proudly narrate the stories about the great achievement of her forefathers who did not succumb to the odds and worked diligently to realize their dreams into reality.

There was one household in this village at the time of the birth of Awal Begam. Now after almost eighty years later the number of households in the village has increased to 60 with a population of more than three hundred people.

Today, with a small population, Goharabad valley is excelling in education, agriculture and business. Fruit market situated on the right bank of Ghizer River in the village is famous all over Gilgit-Baltistan. People from far-flung areas visit this village to buy different variety of fruit and locally manufactured foodstuff like Kilao and Dishaw.

For the last two years, this village has been the hub of tomato and vegetable growing which are supplied to district headquarter Ghakuch in times of shortage or off-season times. Moreover, the village also has produced political activists, social workers, educationists, engineers, bankers, medical practitioners who are rendering their services at the regional and national levels. Furthermore, the village relatively occupies a unique place in the Tehsil as it has become a hub of quality schooling, business activities, labor work for adjacent villages, etc.

The people have had the problem of clean drinking water which has been resolved as a result of the completion of the water supply scheme in 2007 providing fresh drinking water to the residents of the village from miles away up into the Gitch pasture.

Awal Begam, though no more in the world but she will live in the history of this small village that gave birth to her as its first child. 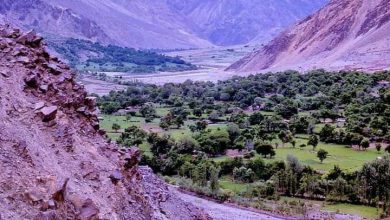