This post discusses the key ideas of Muhammad Ali Jinnah’s speech to the first constituent assembly of Pakistan on Aug 11, 1947.

Pakistan emerged as an independent country on the world map on 14 August 1947 in accordance with the Indian Independence Act 1947. The act provided partition of the Indian subcontinent into India and Pakistan on Aug 15, 1947.  It also provided that the Government of India Act 1935 would act as a temporary constitution unless the two new states made their own.  Moreover, two sovereign constituent assemblies for both of the states set up by the royal consent. The constituent assemblies would have the dual role of framing the new constitution and form the government for their respective states.

When did the First Constituent Assembly of Pakistan first time meet?

Constituent Assembly of Pakistan met for the first time on 11th August 1947 under the presidency of Muhammad Ali Jinnah, the founder of Pakistan. Mr. Jinnah’s addressed this first meeting which is considered pivotal as this speech presents a blueprint for what the new Muslim state, Pakistan, should like in the future.

What were the key ideas of Jinnah’s speech to the assembly?

Muhammad Ali Jinnah’s key ideas in his speech to the First Constituent Assembly of Pakistan were as follows:

1. Maintenance of law and order

The first and foremost thing Jinnah emphasized in his speech was the maintenance of law and order. He urged the assembly to realize this responsibility as the first duty and exercise all powers to maintain law and order to ensure the protection of life, property, and religious beliefs of the citizens.

Jinnah was very much concerned with the curse of black marketing and considered it a colossal crime against humanity causing a disturbance in the control and regulation system of foodstuffs and essential commodities, wholesale starvation, and even deaths. . He advised the assembly to put measures in advance in order to check the monster.

Jinnah in his speech talked about the evil of nepotism and jobbery emphasizing of the members of the assembly to crush it relentlessly. He made it clear that he won’t tolerate any kind of jobbery, nepotism or influence directly or indirectly brought to bear upon him.

5. Time will prove Partition was the only solution

6. Urge on working for making Pakistan a strong nation

Jinnah urged residents of the new country to bury the hatchet and work in cooperation as one people. He emphasized show of exemplary unity by standing above all types of discrimination.  To him, it was the only way to make Pakistan one of the great nations of the world.

7. Religious freedom and same and equal status of citizenship

Jinnah in his speech categorically stated that as a citizen of state people will enjoy the same and equal status. They will enjoy equal rights, privileges, and obligations. He made it clear that the citizens would not be discriminated against on the basis of religion. People will enjoy practicing their religion and faith. Creed, caste, and religion would have nothing to do with the business of the state. 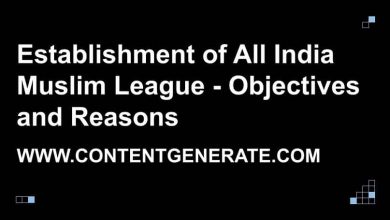